Coming from a historically black university not widely known nationally for its basketball program has put professional basketball player Clinton “Trey” Johnson III in a position where he says he continually has to prove himself. An uphill battle where “you don’t get the benefit of the doubt,” is one way Johnson describes his journey into professional basketball; however, the 27-year-old athlete credits his disciplined work ethic for opening various doors of opportunity.

While the NBA lockout continues to worry fans and NBA advertisers, Johnson does not expect to be affected by the basketball league’s decision right away because of his one-year contract with the Bancatercas Teramo.

On July 1 the NBA locked out its players for the first time since the 1998-99 season after its Collective Bargaining Agreement expired. The announcement came four months after the National Football League lockout, which ended by the beginning of August.

According to the Associated Press, basketball team owners want to reduce the players’ guarantee of 57 percent of basketball revenue, and league officials say 22 of the 30 teams would lose money this upcoming basketball season.

“It’s going to be interesting to see what actually happens, who gives what and how much either side gives,” says Johnson.

Earlier this year, a group of college students from New York followed Johnson around for his perspective of the NBA lockout for a documentary.

“It was different. It was kind of annoying a little bit ‘cause you had cameras in your face 24/7.…but at the same time I think it’s going to be good for people to see,” he continued.

Johnson says the documentary is set to be released after the lockout ends. 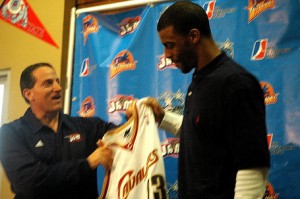 Johnson has played for eight different professional basketball teams including the Cleveland Cavaliers, Toronto Raptors, and the Los Angeles Lakers.

Since leaving Jackson State University in 2007, Johnson has played for eight different professional basketball teams including the Cleveland Cavaliers, Toronto Raptors, and the Los Angeles Lakers. His basketball career has placed him with teams in Serbia, France, and most recently on August 3rd in Italy with the Bancatercas Teramo.

Johnson, who was named the 2007 Southwestern Athletic Conference Player of the Year and is a two-time National Basketball Association Development-League All-Star along with last year’s NBA D-League leading scorer, joined Kobe Bryant and the Lakers earlier this year for their last season game and three games during playoffs.

[quote]“It was a great experience. It was everything that anyone would think about a dream,” says Johnson of his time with the Lakers.  “It was a blessing more than anything.”[/quote]

After God, Johnson credits his parents, college coaches and other players such as Mo Williams, Ryan Lothridge, Justin Reed, and Mateen Cleaves for helping him become the player he is today.

“I think my work ethic is what helped me get me over the hard part. I learned what hard work was at an early age from my grandmother and my mother.” Growing up, Johnson says he witnessed his mother work multiple jobs. “[She] just did whatever she had to do to make life easier,” says Johnson.

While living out of the country is something the basketball player says he really did not care for at first, Johnson says, “I’m more so use to it now than I was in the beginning.” Living in Europe has also given the athlete a glimpse into what he describes as a different way of life.

“I think in America, we live to work, and it’s the other way around here, they work to live.”

“A lot of stuff closes early. People get out of school early,” Johnson describes of the Italian town where he currently resides.

Dating, of course, is also complicated by being oversees, says Johnson, who is single.

“It’s difficult to be in [a relationship] doing what I do, I’m always gone and things of that nature, but…. It has its good and its bad. It makes you really have to get to know a person from talking,” says Johnson.

“But, it’s only so much you can get to know without being around someone,” he continues.

In addition to his dating life changing, Johnson’s hobbies also have changed in Italy.

When in the U.S., Johnson says he could be found enjoying the company of family and friends.

“I’m a pretty simple guy. I like to watch movies; especially here [in Europe], I watch a lot of movies. In Europe I play video games, I really don’t play video games that much in the U.S.”

On the professional level, Johnson says he’d like to improve his 3-point shot and become more consistent from the long range.

“I’m always trying to improve my game through many different ways,” says Johnson. From studying film on other players and himself, asking opinions of coaches, and just putting in constant hours of work in the gym and weight room, Johnson aims for long-term success.

“I would love to become a mainstay in the NBA and have a solid role on a championship team,” says Johnson. “Winning an NBA championship would be such a blessing.”